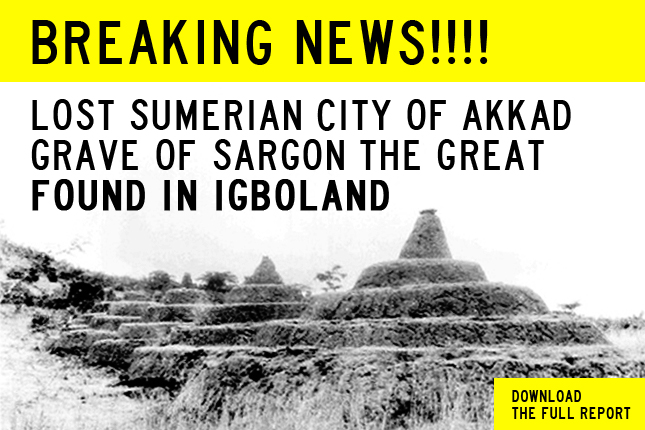 THE LOST SUMERIAN CITY OF AKKAD RULED BY SARGON THE GREAT HAS BEEN FOUND! IT WAS EXCAVATED IN 1950 BUT WAS MISTAKENLY OVERLOOKED FOR WHAT IT WAS!!!

In 1950 a young British archeologist fresh out of the university undertook his first major archaeological dig. A town in Igbo land, South-Eastern Nigeria had become notorious for its ancient bronze, copper and exquisite pottery and beaded wares which the villagers accidentally excavated while digging wells, cisterns and graves. For as long as the villagers could remember, their ancestors had always dug up exquisite and highly ornate archaeological goods from their farmlands and from the foundations of buildings. Digging up buried goods had become a local pastime because the beautiful goods fetched good money from Arabs, Fulanis, and Europeans who paid handsomely for them. In 1950 the Nigerian National Commission for Antiquities got wind of the trade. The British colonial officer in charge of Antiquities sent a young British archeologist fresh out of the university to undertake an excavation. Thurston Shaw worked on the Igbo Ukwu site for several months but only excavated three pits some of them under the foundations of buildings, and recovered enough artifacts to fill three museums. This was a civilization outside living memory of the natives. Perhaps mistakenly or out of political reasons, as Shaw himself is quoted to have said, the excavated goods were given a date of 9th Century A.D.

23 years of studying the Sumerian phenomenon and its Pre-Cuneiform inscriptions and comparative research into the Igbo Ukwu archaeological artifacts have revealed that what Thurstan Shaw excavated in Igbo land was the lost Sumerian city of Akkad ruled by ‘Sargon the Great’ circa 3,500 B.C.! Royal seals of Sargon the Great and of his sons Menes or Manus Tutu (who became the first Pharaoh of dynastic Egypt), Naram Enzu and Bag Eri, to name a few, as well as artifacts bearing the names of Sargon, his sons and his gods are easily discernible among the goods excavated in Igbo Ukwu, written in Pre-cuneiform pictographs, symbols and letters.

Assyriologists believe that Sargon was the historical representation of Biblical Nimrud, for both were first Post-Deluge kings of Sumer.

In 23 years of consistent research on the Sumerian phenomenon, the Catherine Acholonu Research Center has come up with three major publications and a plethora of articles. One of the publications – They Lived Before Adam: Prehistoric Origins of the Igbo, The Never-Been-Ruled – won the 2009 International Book awards in USA, and was featured in C-Span Book TV, New York in 2009 as a groundbreaking publication (see U-Tube Video online). The highly deteriorated limb-bones and skull of a monarch buried in Igbo Ukwu was also taken to the British Museum. He wore a copper crown with Sargon’s pictograph engraved all round on it, a bronze breast-plate, several rows of copper wires on his ankles, two beaded armbands, and most surprising of all, a regalia strung with a whooping one hundred and eleven thousand beads!!! Sumer was the world’s first in bronze, copper and iron technology, writing, astronomy, agriculture. All the major hallmarks of her civilization are represented in the few pits that Shaw opened. Igbo Ukwu and Oraeri (the neighboring town) are still teeming with archaeological goods yet to be excavated.

We call on the British Museum to allow a reexamination of the Igbo Ukwu excavation, and we invite the international media to a series of World Press Conferences to be held in Abuja, Nigeria and in major cities in the world from the month of April onwards to share our discoveries with the world. Please contact us by email or by phone to get the itinerary for the press conferences.

Former Special Advisor on Arts and Culture to the Nigerian President

WE ARE ANNOYNCING THE DISCOVERY OF THE EGYPTIAN DUAT,
TEMPLE OF THE SUN AND LOST CITY OF HELIOPOLIS IN WEST AFRICA

EnuguState/Igboland/Nigeria, was the spiritual and religious seat of the ancient Egyptian civilization, and as such the control-base of its world-famous Theocracy!

Collaborators, Volunteers, & other Artists being sought! For more info please contact us.

The human toll of 70+ countries' anti-gay laws. The struggle to repeat them.

Passionate about Nigeria and Writing

How to love Igbo things (or what you will).

A Traditionalist's Blog Celebrating "That Vanished Tribe into Which I Was Born: The American Negro"

Odinani: The Sacred Arts & Sciences of the Igbo People

An interactive resource promoting the study of black Atlantic cultures